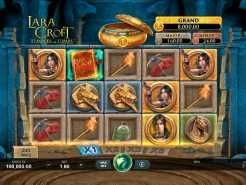 Play Now
Join in on another exciting adventure of the Tomb Raider, as the franchise returns to online casinos with a brand new game. Lara Croft: Temples and Tombs are waiting for you to discover hidden secrets and lucrative bonuses at every turn. The tie-in between the Tomb Raider rights owners and the renowned game developer Microgaming is one of the longest and the most prosperous in the history of casino games. This slot is the third in the series, and continues with the same high-quality graphics as the original two releases, adding a few new symbols, innovative features, and better rewards. The online slot comes with innovative Rolling Reels leading to several winnings in the same sequence, with progressive multipliers, also free spins where you win up to 15x your stake. 3 jackpots awaiting deep in the catacombs, so read on to find out more. It was in 2004 that Microgaming released the first Tomb Raider instalment. It was also the first of a kind licensed and branded online slot, setting a new trend for slots that has persisted for ten years. In 2008, the sequel was released, called Tomb Raider: Secret of the Sword slots. Both continue to be incredibly popular at online casinos, and now, a decade later, Microgaming has finally decided to launch this new game to complete a trilogy.

Lara Croft: Temples and Tombs sees Lara in search of valuable ancient Egyptian artefacts. The slot is played across 5-reels, and 15 pay lines and Lara can lead you to free spins with 3x multipliers, and you also have a particular bonus treasure hunt game with guaranteed winnings. The impressive 3D graphics are exceptional, and the gameplay is stunning. The Global Adventure bonus takes you around the world, where you will need to collect artefacts. By combining an Egyptian theme with this strong character guarantees a broad appeal to a vast audience. Dark walls and a torch-lit tomb envelope the 5 reels, and 243 ways to win slot release. You will not have to search to discover and access the bonus features of the game. The gold bowl lays above the reel grid, right near the panels showing the Minor, Major, and the Grand jackpots. There are 1x, 2x, 3x and even 5x win multipliers below your reels, which hints the increasing rewards with each Rolling Reel in the sequence. All the gameplay symbols will drop away from view after every spin, thereby revealing a quick glimpse of the gold doors leading to the mysterious temple that lays behind, before the fresh ones drop in to replace the old ones. Every icon position is designed to resemble stone blocks, and they appear with a thud, accompanied by a spectacular soundtrack. The Lara Croft: Temples and Tombs is produced by Triple Edge Studios, in conjunction with Microgaming. It forms part of the growing trend seeing significant game developments collaborating with lesser-known ones to the benefit of both developers.

This 243 Ways to Win slot pays out whenever you get 3 identical icons in any position on your reels from left to right of your screen. You need to stake at least 20 coins a spin, and you can set the coin values from just $ 0.01, up to $1.00 each, and overall stakes are from $0.20 a spin to $20, whatever suits your budget best. Game symbols include parts of Lara’s gear, like her water bottle, a rope, a grappling hook, and a doctor’s bag for the inevitable bruises. The higher-paying icons are statues of Egyptian Gods, and four different images of Lara. The game sees Lara on her motorbike, jumping from one exciting adventure to another, shooting her gun. The best paying symbol is Lara, looking out from behind the reels. She is worth 10x your trigger bet when she appears on all 5 reels. The scarab beetle image makes an inevitable, yet welcome appearance in an Egyptian setting and the gold icon is the Wild and replaces other figures if needed to bridge missing gaps in a winning run, although it can turn up on the central reels only.

You collect Wild icons that will appear throughout the sequence within the gold bowl on top of the reel grid. Once the Rolling Reels stop, you can effectively win the Mini, the Minor or Major jackpot. They aren’t progressives but are still worth payouts of 15x, 100x, and also 5,000x your trigger bet respectively. The Lara Croft book opens the free spins up whenever you get 3 or more at once. The slot awards 8 free spins for every winning way from the triggering spin, which may lead to a maximum win of 80 free games, with higher win multipliers active throughout the entire round. The win multiplier blocks show an initial 3x win, and more wins during the Rolling Reels round are then boosted by a further 6x, 9x and15x the bet. You can reactivate the free spins by getting additional books, with any new free spins then added at the end of the round.

Play for Fun or Real Money

It is always highly recommended to play the free demo play version of the slot before wagering real money. Playing a few free spins should give you an idea of whether you enjoy the slot gameplay and if it fits your bankroll.Lara Croft Temples and Tombs slots serves up 243 winning possibilities. Triple Edge Studios and Microgaming have worked very hard to develop the game, which is also celebrating 15 years since Microgaming released the original Tomb Raider slots. The slot is equipped with lots of lucrative bonuses, including the exciting rolling reels feature, and the increasing win multipliers. You can get as many as 32 free spins during the bonus round, with win multipliers of up to 15x your stake. There are 3 generous jackpots, with the most generous one providing a high payout of up to 5000x your bet.

Mobile Play for Android and iOS

You can play Lara Croft using your tablet, smartphone or desktop, and the slot game is designed to work correctly on any screen size, mobile device and operating system. Whether playing on your mobile device or desktop, regardless of whether the device operates on iOS, Android, or Windows the slot provides you with a fun gaming experience. Lara Croft: Temples and Tombs is appropriately optimised to work correctly on any type of iOS and Android mobile device. Lara Croft is happier on iOS or Android, and users can accompany her on her tomb raiding adventures on a tablet, smartphone, and desktop. The slot has 3 jackpots of different values, with the best one giving you 5,000x the bet. You can assist Lara on her noble quest at any Microgaming online casino.

Lara Croft: Temples and Tombs slots is a high volatility slot that tends to pay out higher, but rare when winning combinations appear. The slot uses the typical Microgaming layout and setup with a grid containing 3 rows, 5 reels, along with 243 ways to win. The RTP percentage is fixed at 96.05%, with bet sizes from $0.20 coins, to $20 coins per spin for the bolder and braver. Lara Croft is an excellent slot game, that is loaded with bonus features, free games, and a high jackpot. The slot graphics are absolutely gorgeous, and the intense soundtrack does the game proud, and does everything that it promises, providing you with tons of winning thrills.
Play Now